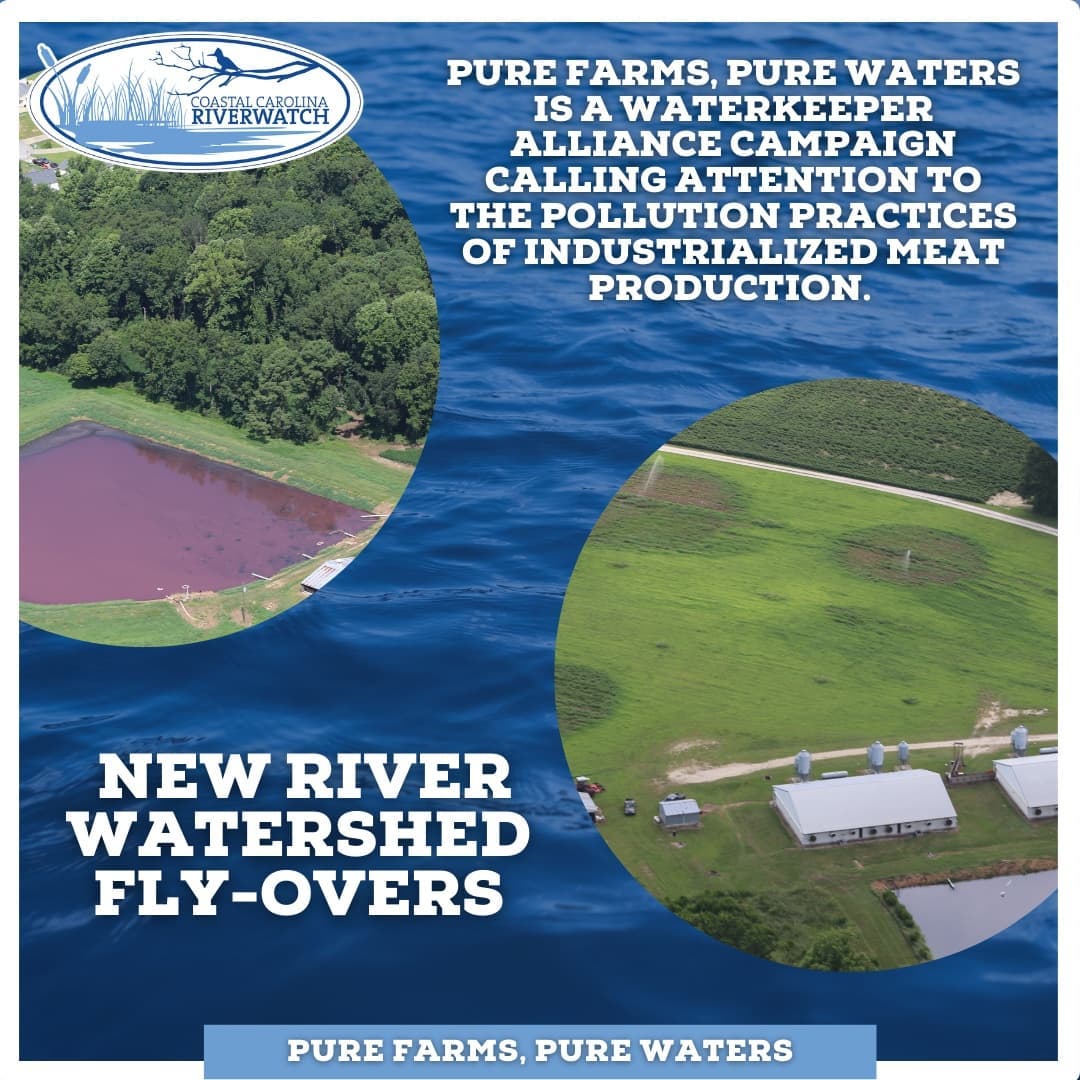 Pure Farms, Pure Waters campaign calls attention to the destructive pollution practices of industrial agriculture and factory farms, advocates compliance with environmental laws, and supports the traditional family farms that industrial practices endanger. The Pure Farms, Pure Waters campaign addresses the failure to regulate pollution from industrialized swine, poultry, and dairy facilities that is devastating rivers, lakes, and estuaries and lowering the quality of life in our communities.

Coastal Carolina Riverwatch (CCRW) works to educate the public about the impacts on quality of water and quality of life, supports communities and local farmers, and advocates for sustainable food systems. 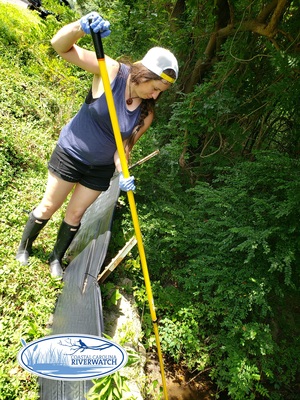 We work to help decision-makers understand the need to strengthen and enforce existing rules on the discharge of animal waste into our waterways, seek to hold corporations that dictate facility operations accountable for waste management practices, promote best management policies that protect our waterways, and support independent farmers, and take legal action against violators.

“CAFO pollution has affected North Carolinians for decades. Each year, NC hogs produce 10 billion gallons of manure. This unmanageable amount of waste is contaminating our waterways and harming our communities. In our watershed, the New River is most heavily impacted.  Coastal Carolina Riverwatch collects regular water samples surrounding these facilities to analyze for fecal bacteria. We also conduct watershed flyovers to look for pollution violations. By collecting this data, we can work with several statewide partners to advocate for the reform of these destructive industries”. -Rebecca Drohan, Waterkeeper, Coastal Carolina Riverwatch (in photo).

What is a CAFO?
CAFO stands for Concentrated Animal Feeding Operation. These are commonly known as “factory farms”. They are large, windowless production facilities where thousands of animals are confined in crates or stalls without access to sunshine, fresh air, or natural vegetation. With massive amounts of animals, comes massive amounts of unmanageable waste. North Carolina is number two in the nation for industrial swine production and number three for poultry. Eastern NC is particularly inundated with these facilities.

North Carolina’s hogs produce 10 billion gallons of manure each year. Hog waste is stored in large open-air “lagoons”, or cesspools. Liquid from these pools is sprayed onto adjacent fields for disposal. As the waste is sprayed, it can run into our waterways. During heavy rain events, lagoons can fail. Millions of gallons of untreated waste can be spilled and animals are left to die. 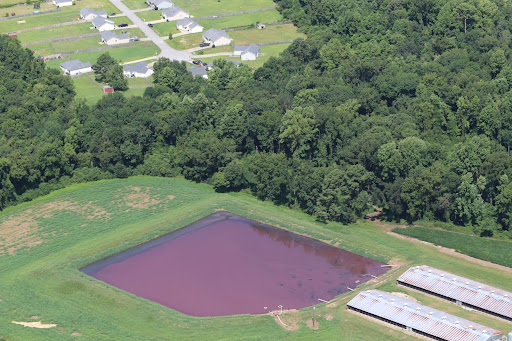 Though safe waste management of swine operations is severely lacking, these facilities are subject to State permitting and regulations. Poultry operations are not. NC’s poultry industry is rapidly growing with very little oversight and almost no public records.

NC poultry operations produce 5 million tons of waste per year. Poultry waste, mixed with bedding and carcasses is stored in large piles. These piles are often left uncovered, easily blown away by wind, or washed into our waters. Due to a lack of transparency within the industry, very little is known about where this waste is transported and how it is disposed of. 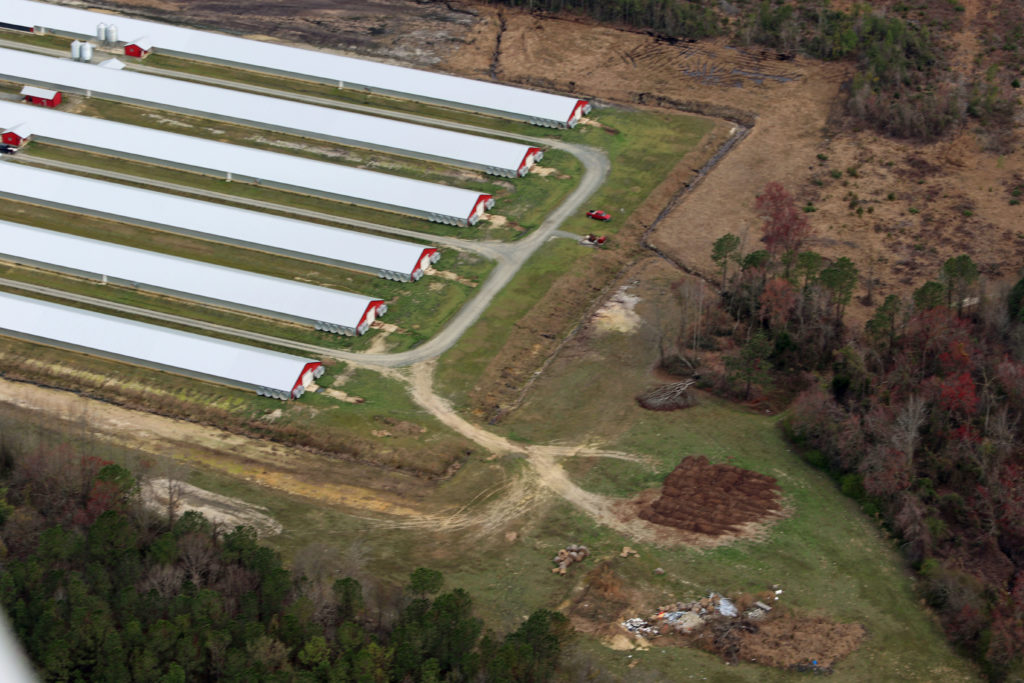 Swine and poultry pollution have severe impacts on the environment and on public health.

When CAFO waste enters the environment, these contaminants come with it. This can pollute soil and groundwater, and make surface waters unsafe to recreate in. Nutrient overload from nitrogen and phosphorus can cause harmful algae blooms and fish kills.  Many of these operations were built in areas prone to flooding. During heavy rain events, massive amounts of waste can be spilled and animals are left to die. CAFO waste can also enter the air as particulate matter.

Communities surrounding these facilities are impacted with diminished quality of life due to overwhelming odors and health complications from air and water pollution. These impacts disproportionately affect communities of low income and/or People of Color, making CAFOs a significant environmental justice issue. 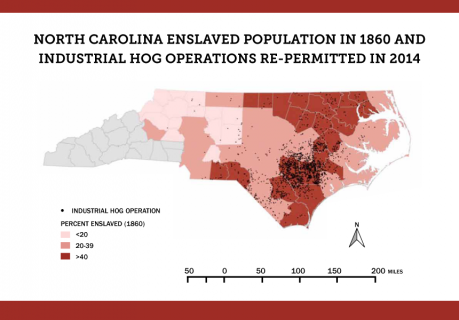 By overlapping maps of North Carolina’s enslaved population from 1860 and industrial hog operations re-permitted in 2014, Dr. Steve Wing and Jill Johnston were able to show the concentration of CAFOs following a pattern that disproportionately affects the descended families of enslaved peoples in North Carolina.